What is the Best Trends of Apple Smart Watch in Modern Health Care?

We are living in the 21st century where science and technology are advancing faster than ever. We should take advantage of this technology to improve our lifestyle. There is no field left in today’s world that is untouched by modern technology. Take the travel, health, food, and shopping sectors as examples. In this time one of the services joined in the past you only had a watch that showed the time.

There is no field left in today’s world that is untouched by modern technology. Take the travel, health, food, and shopping sectors as examples. In this time one of the services joined in the past you only had a watch that showed the time.

With today’s Best Apple smart watches, they are no longer just showing the time, but they can also make phone calls and send chat messages, give directions, and even provide health-related functions.  You might be surprised at that, but it is a reality.

Here we will discuss some of the best trends for Apple smart watches.

In the USA and the UK, the Apple iPhone is the leading device (55%), while Samsung has the highest market share in Europe (33%), and Apple holds the second largest market share (28%).

By studying these statistics, you can gain an appreciation for the health-related features available within the two dominant operating systems.

There is a built-in app called Health that comes pre-installed on all Apple iPhones. Open the app and enter some basic demographics to get started. The Health app can also display historical data, including steps, distance, and staircases climbed.

In the Peoples experience, most iPhone users do not even realize there is a Health app for iPhones. Android devices have an analogous feature via user-installed apps, such as Samsung Health and Google Fit.

In addition to accelerometers, barometers, and global positioning systems, smartphones have a multitude of sensors that can determine the distance traveled, elevation gain, and estimated calorie expenditure.

By establishing that nearly all people carrying a phone have a smartphone, we can derive the fact that nearly every patient has additional, untapped data at hand that could be utilized to measure health parameters, such as activity levels and heart rate. When fully utilized by the patient, the system can provide much more information, including weight and blood pressure logs.

In some applications, the torch and camera can be used as a photoplethysmograph for reading the heart rate and rhythm irregularity. However, this is not the intended use of the camera and torch, and the results are highly variable. Patients can easily record a walk and review distance traveled, elevation gain, pace and estimated calorie expenditure with a few taps of the screen and a little instruction. Patients may be motivated by seeing their progress and making progress tracked.

Smartphones are capable of collecting primary data as well as acting as a hub for additional sensors to be incorporated. AliveCor offers a small hand-held device (Kardia), which can be used to record single-lead ECGs as needed. Small enough to be attached to a smartphone or carried in a pocket, the device enables patients to record 30-second Lead 1 ECG tracings simply by placing their fingers on the contacts. The ECG trace is then reviewed by an algorithm to differentiate either AF or another heart rhythm from sinus rhythms. Combining physician review with the algorithm increases accuracy, especially in cases of AF. Overall, the AliveCor device has recorded more than 30 million ECGs.

With the release of the Kardia 6L by AliveCor, which can record 6 leads on a simple-to-use device using just the hands and thigh, these devices could replace traditional ambulatory ECG monitoring in certain palpitations patients. In addition to being owned by the patient, the device can be kept by them indefinitely, allowing for longer-term monitoring without using intermittent monitors in the event of a patient experiencing a rare episode of palpitations. This may eliminate the need for the implantation of a loop recorder in some cases. It can even be used in guest mode to diagnose a friend or bystander.

The Best Apple smartwatch is perhaps the best additional sensor that can be added to a smartphone. 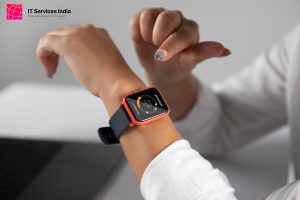 Apple Smartwatches have grown rapidly in popularity, and Apple has quickly taken over the watch industry as a whole, not just Apple smartwatches.  In 2016, Apple shipped more watches in the last quarter than Rolex, Swatch, and all other Swiss watch manufacturers combined. The Apple Watch dominated 2016, with 49% of the market. Over 18 million Apple Watches were sold last year. There is much overlap and similarity between the Watch Series 4 and 5 except for a few technologies, which are described below. Competition and technology are advancing this market with better products at lower prices, making them increasingly accessible to consumers. In 2016, Men’s Health wrote that one in five American adults wears a fitness tracker. There’s no doubt that the technology sector is quite large, and the general public is eager to use these devices. As clinicians, it is our responsibility to assist patients in using these devices appropriately and effectively.

With the addition of an Apple Smart watch, you have access to additional information without having to carry a phone. For example, a user with an Apple Watch will have access to metrics such as steps, stairs climbed, distance walked, stand hours, and estimated energy expenditures.

In order to understand the use of Apple smart watch data in daily practice, a review of accuracy is needed-particularly for HR and EE. A number of studies have shown that ECG HR is highly correlated with that recorded by the Apple Watch and Fitbit. Apple Smart Watches showed the most agreement with ECG across a range of activities including sitting, walking, running, and cycling, within 5–10% of the ECG. As faster HR and atrial arrhythmia are present in some cases, Apple smart watches generally underestimate HR compared with ECG. Darker skin tone, larger wrist circumference, and higher body mass index are associated with greater errors in HR measurement.

The data tell a different story regarding EE. Compared to a standard of indirect calorimetry by expired gas analysis, all wristwear devices tested had an error margin of approximately 27%, usually underestimating expenditures.

In a study with over 2,000 participants who used Fitbits over six months, a higher number of steps per day and highly active minutes per week were associated with more weight loss.

Generally, the Best Apple smart watches detect HR using photoplethysmography (PPG) sensors, which distinguish pulsatile changes in blood volume under the skin. This technology is capable of detecting HRs between 30 and 210 BPM. Human heart rate data can be used clinically in a number of ways. It can be used to evaluate general fitness and as a baseline measure for people with bradycardia. It may even be used to evaluate chronotropic response for people with sinus bradycardia. Patients on rate-lowering therapy can use it to decide what dose to use to achieve their goal of resting heart rate.

No one can have had the expectation of these types of technologies in the past. But the reality is in front of the eyes, Apple Smart Watches. Several years ago, it seemed impossible that a smartwatch no larger than a watch could make phone calls send and receive text messages, track sleep and activity, or record a single-lead ECG, Technology such as this is widely available and becoming increasingly affordable.

These devices offer many capabilities today, and as technology advances, they will offer even more capabilities, while we continue to study and learn how to use these metrics to improve patient care in the future. A great deal of untapped information is waiting to be studied and applied in the new era of medicine. While there are limitations, they can be recognized and are not prohibitive to use.

How to Make Money Online?

Digital Why is digital marketing important for your business?
10 min read

Why is digital marketing important for your business?

Small businesses and startups are doing everything they can to stay in...

Why You Should Invest In Mobile App Development Services in India

Do you want to find the best mobile app development companies in...

The Effects of Social Media on Your Mental Health

Nowadays, a lot of people have their smartphones as virtual companions. These...